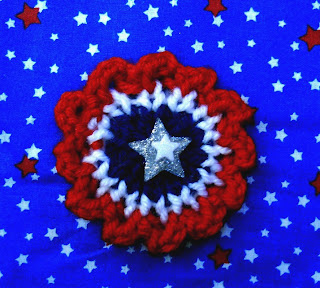 The Patriot Pin is a quick-knit just in time for July 4th. So simple to make, but very festive! Here's how:

Size: 2 inches (5 cm) in diameter
Materials
Note: Pin was worked in a counterclockwise direction in the round using one strand of yarn with the indicated colors and the 12-peg loom. The direction you work in really doesn't matter, but is stated here for clarification of the bind off explanation.
Instructions
Now you are ready to attach a pin to the back and wear with pride!!
May you have an awesome 4th of July!!!