Stand me in the corner, because I'm a bad student. I was suppose to be working on Ann Bipes Easter Bunny for LoomClass this week, but I had already started my own bunny design on the Knifty Knitter blue loom a few days earlier. The blue loom was the loom needed for the LoomClass project so I knew I was in trouble. I only had a few rows of my own project completed on the loom and could have removed it to do the assigned project, but I had several new techniques that I wanted to experiment with and I was afraid if I didn't do it while it was still on my mind that I would completely forget. The results of my bad behavior is Blossom Bunny, a loom knitted bunny with a soft sculpted face.

As stated earlier, Blossom was made on the 24-peg blue Knifty Knitter. Starting at the tail end, I used a drawstring cast on (see the Easter egg pattern), worked six rows of flat knit stitch, plus two rows of u-wrap stitch and then closed the bottom area using the drawstring. The largest part of the body was completed with eighteen e-wrap rows. For the neck area, I decreased using the flat knit stitch by k2tog across the row. When I reached the end of the row, I cut the working yarn leaving a six inch yarn tail. Decreasing this much on a loom is usually a problem, but by working the decreases using a flat knit stitch the tension can be adjusted to accommodate the stationary pegs while knitting and later by using the cut yarn tail as a drawstring.

Leaving another six inch yarn tail in the new working yarn, I continued to flat knit the twelve pegs with loops and cast the working yarn on over the empty pegs. On the next two rows, I flat knit all twenty-four pegs to complete the neck area of the head. Continuing with the head, I worked twelve rows of u-wrap stitches, three rows of flat knit stitches in the nose area and ended with open gathered bind off.

The body is stuffed with fiberfill using a knee high stocking as a liner. The neck area is cinched from the inside to the desired size using the yarn tails and then tied off. Pull the stocking liner into the head area and continue stuffing. When the stuffing has been completed, the gathered bind off is cinched shut and tied off. Other parts include the legs, ears, tail and face. The legs were knitted from feet up using the drawstring cast on and sixteen rows of flat knit stitches on the 8-peg end of the Knifty Knitter spool loom. The ears were worked as a flat panel on the blue loom starting with eight rows of six stitches, then increasing a stitch at the beginning and end of row nine and knitting a total of eight rows with eight stitches. The ear is completed by k2tog at the beginning of each row until only one stitch is left on the peg. The tail is a big white pompom stitched over the initial cast on spot. The face is soft sculpted, which really brings the bunny to life, with a pink embroidered nose and big brown wooden beads for eyes.

Now that Blossom has been completed, I'll do the Anne's Easter Bunny so Blossom will have a friend. 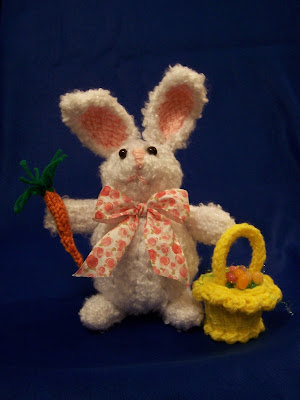