Among some of my first loom knitted projects were the autumn hats for my grandchildren that I made last October. I posted information about these on several of the Yahoo groups, but at that time I didn't have a blog. I've decided to go ahead and add them to my blog since they are autumn projects. 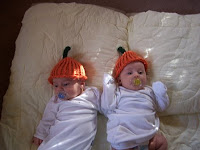 The first of my autumn hats was the little pumpkin hats I made for my twin grandchildren who were born last September. They were just a few weeks old when the picture on the right was made. The Pumpkin Hat pattern is listed in my Pattern Box on the right. 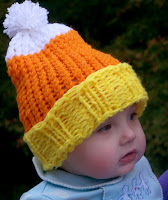 My second autumn hat was the Candy Corn Hat I made for my granddaughter. She was only nine months old when the picture was made. This hat was made using Red Heart worsted weight yarn with 2 strands held as one. The yellow brim was made rather long in order to turn up on the outside using k2/p2 ribbing. Two or three rows of yellow and the remainder of the hat were made using the basic e-wrap knit stitch (double strand wraps knitted over double strand wraps). The yellow & orange part of the hat, along with 2 rows of the white, was made on the red KK loom. I decreased one peg every 3 or 4 pegs on the 31 peg red KK after doing about 18 or 19 rows of the orange to end up with loops on 24 pegs. These were transferred to the 24 peg blue KK and a couple more rows were knitted off. After that I decreased every other peg on the 24 peg blue loom to end up with 12 pegs with loops, which were transferred to the little peach colored 12 peg KK flower loom. A couple more rows were knitted off and then I decreased every other peg again to end up with six pegs. I ended by knitting off the 6 pegs using the existing loops on the pegs since they each had 2 wraps on them and used the gathered removal method to bind off. A white pompom was added to the top. 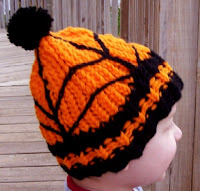 The third of the autumn hats was the spider web hat I made for my grandson, who was 2 years old when the picture was made. This hat was done on the green loom. The cuff is a k1/p1 ribbing with 3 rows of black, 3 rows of orange and 3 more rows of black. The body of the hat was done in orange using a regular e-wrap knit stitch for 18 rows. After that I used the same technique outlined in the Tommy Turkey Hat pattern, where you divide the hat into 4 sections, and decrease into a point. When you finish the 4 wedges, whip stitch them together. The web pattern was accomplished by marking off where I wanted the web to go, 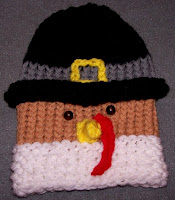 then holding a strand of black yarn on the inside of the hat and chain stitch it in place using a crochet hook through the knit stitches.

The last of the autumn hats was my Tommy Turkey Hat. This was one of those spur of the moment things that was just fun to do. The instructions for this pattern are also located in the Pattern Box on the right.
Posted by Brenda, Domedweller at Monday, October 08, 2007