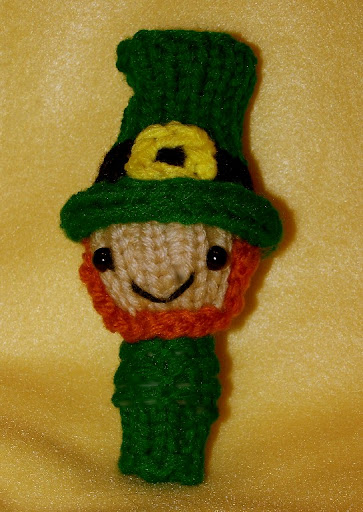 After sharing a picture of my little "loomy amigurumi leprechaun" made on the DA small gauge Mini-WonderLoom, several folks on one of the Yahoo loom knitting lists wanted to know if he could be made on the Knifty Knitter Looms. The answer is: "Yes, Virginia, there can be a Knifty Knitted leprechaun!" Since the Knifty Knitters are large gauge looms, I thought they might not be the best choice for knitting amigurumi. However, I'm very pleased with how well the KK leprechaun turned out. Of course, the KK version is about six inches tall - an inch or an inch & one-half taller that his four & one-half inch small gauge cousin, but much of that is due to the oversized top hat.

Modifications had to be made to the original pattern. The first thing was to use two strands of yarn held as one instead of the single strand that was used on the small gauge loom. Two different Knifty Knitter looms were incorporated for the KK leprechaun above. The 8-peg end of the spool loom was used for the body and the I-cord hat brim. The 12-peg flower loom was used to make the head and the main part of the hat. Also, I used some different stitch techniques to shape the bottom of the body and the top of the hat. This time around I remembered to use black when knitting the hat brim and added a yellow chain stitched buckle. As for the beard and hair, I used two strands of carrot colored Red Heart yarn instead of the copper colored fun fur and loosely crocheted an eight inch chain, which was whip stitched in place. I decided "fun fur" is an oxymoron, because it really isn't much fun to work with. To me, the fun fur is a bit too fussy for the amigurumi style. Another change was the use of buttons for the eyes. Of course, this would not be recommended for use with small children, but I just wanted to see what they would look like on this one.

At the rate I get things done these days, the pattern might be available in time for next St. Patrick's Day. In the meantime, I plan on making other amigurumi characters on the Knifty Knitter Looms since they are quick knits and such a hit with the kiddos.
Posted by Brenda, Domedweller at Tuesday, March 17, 2009