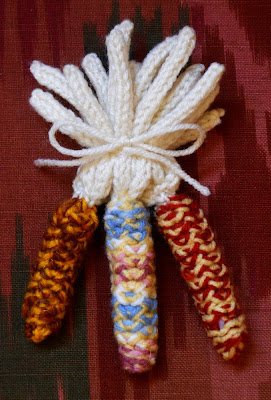 Someone on Yahoo's Knifty Knitter Group recently asked if you could make Indian corn on the knitting looms similar to Alicia Kachmar's crocheted design that she describes in her blog post, "It's never too late for Indian corn."  I had actually saved the link to Kachmar's Indian corn post over a year ago and had tried to work out a stitch pattern that would look acceptable on the knitting loom. At that time, things just didn't click and I moved on to the next project at hand. When the subject came up again, I decided to give this project another shot.
First, deciding on the stitch pattern was the key to making the corn look like corn. After searching several needle knitting sites, I settled on the wrong side of what's known as the "linen stitch." The next thing was to translate the stitch pattern to the looms and decide on which loom to use. Since this stitch required an odd number of pegs and I planned on working it in the round, the five-peg end of the Knifty Knitter Spool Loom became the loom of choice. After working out the translation, everything sort of fell into place. Here is an expanded explanation of the linen stitch for the 5-peg loom:

Kachmar recommended using Lion Brand Homespun yarn for her crocheted corn. I tried the Homespun on several ears of knitted corn, but quickly discovered that I preferred Red Heart Classic or Red Heart Super Saver using one strand of solid with one strand of variegated yarn in autumn colors. Also, don't be tempted by the self-striping yarn, because it doesn't change colors quick enough to work properly with the little three to four inch ears of corn. You'll soon discover that trying different yarn color combinations is fun and addictive with this project. You really can't tell how the colors are going to work until the corn ear has been knitted and turned so the wrong side becomes the right side.
The Indian Corn pattern is available as a PDF file here, or in the Pattern Box on the right. It will also be offered as a class project on Yahoo's Loom Class during this upcoming week (November 7-13, 2010). Kudos to Alicia Kachmar for the inspiration for this project!
Posted by Brenda, Domedweller at Friday, November 05, 2010