My hubby had to take a business trip to Uruguay last month and since most of the hotels there do not furnish bath cloths, I decided to make a special tawashi for him so he could remember how much I love him while he was away. The results is my "Hot Lips Tawashi", which was inspired by my daughter's Hot Lips Phone that she had as a teenager about twenty years ago. 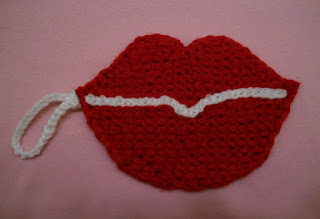 This tawashi was was designed in garter stitch for the 24-peg large gauge round loom using two strands of Red Heart Super Saver in Cherry Red. In lieu of a written pattern for this project, I decided to do a chart; however, I will try to clarify a few things in the following notes:
The "Hot Lips Tawashi Chart" may be accessed by clicking on the title at the beginning of this sentence or from the Pattern Box in the right sidebar. Once the project is underway it works up very quickly. So, knit one up for your sweetie and "shower your Valentine in kisses" on this special day!