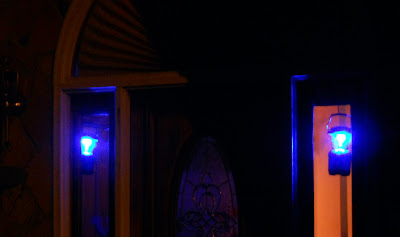 As usual, I'm always late, but I just discovered this last Friday "Light It Up Blue" as a symbol for World Autism Awareness Day. I had a battle with food poisoning over the weekend, so we only did simple LED blue light lanterns for the doorway this year. Next year will be better - I hope.

About.com states that, "Autism was first described as a unique disorder in the 1940s. In the early 1990s, autism diagnoses began to soar. In the 10 years between 1993 and 2003, the number of American schoolchildren with autism diagnoses increased by over 800%."

The CDC Data and Statistics for Autism Spectrum Disorder indicates a rise in autism prevalence from 1 in 150 children in 2004 to 1 in 88 as of 2008. Please note that the data is for children whose birth year is 8 years prior to the surveillance year. So if I'm understanding this correctly, this does not include children born after the year 2000. If this is the case, the statistics may be an even higher ratio than indicated on the CDC data. Never the less, this is a tremendous increase from 1 to 2 in 10,000 in 1980. To sum it up, autism is the fastest growing developmental disability in the United States.

Get all the facts about autism from Autism Speaks.
Posted by Brenda, Domedweller at Tuesday, April 03, 2012