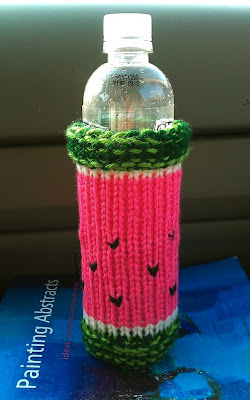 My Quick Can Koozies and Patriot Pin are currently being taught on the Yahoo LoomClass Group by Pat Hathaway, a friend and fellow loom knitter. She has done such a wonderful job and inspired me to knit myself a new koozie using a "watermelon" theme for my water bottles.
When I first designed this little project, I had no idea how useful a koozie would be. These things will keep a drink cold even when left in a hot car for half an hour or more. Since they are made with acrylic yarn, they do not absorb the condensation from the bottle. The condensation is contained evenly by the knit stitches on the surface of the bottle, held inside or partially evaporated through the stitches, so your koozie stays dry to the touch with absolutely no water rings. As you can see I had no qualms about sitting the koozied bottle on my $26 art book to snap a quick picture in the front seat of our SUV.
For the watermelon koozie, I followed the Quick Can Koozies pattern with the following changes: 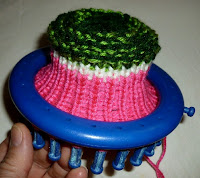 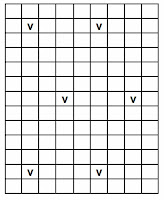 This bottle koozie is just a bit taller than the original, because it was made to fit the tall 17-20 ounce water bottles. This pattern is easy to customize for cans and smaller bottles by decreasing the rows. You can also make this same pattern using the 30-31 peg large gauge looms to fit 2-liter bottles and even add an I-cord or knitted handle similar to the this Lion Brand pattern, Americana Knitted Evaporative Beverage Cooler.

Complete pattern is available as a PDF by clicking below: