One of the biggest complaints regarding the common large gauge looms (aka, Knifty Knitter, Boye, Darice, etc.) is you can't make a baby blanket or afghan without seaming panels. Well, I just happen to have a solution to the problem: the peg-doubling technique. This technique makes it possible to create a flat panel that is double what is typically made on the round loom. In simplest terms, this is accomplished by:
Using the peg-doubling technique makes creating a blanket or afghan on the large gauge loom both easy and more portable for those who loom knit on the go. While designed for the large gauge looms, these techniques are easily adaptable to any knitting loom. The addition of edging, embroidery or other embellishment will make each blanket your own unique design. 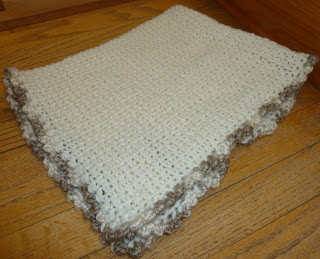 Loom knitted picot edging
The picot edging shown on the blanket in this blog post was done using the same 36-peg large gauge round loom on which the blanket was knitted. It is a very simple technique that uses two pegs to work an I-cord picot; bind off one stitch; then pick up and add a new stitch. It's done in a similar method to the picot bind off shown in my Patriot Pin post from two years ago.

Instructional links
I've been teaching this class on the Yahoo LoomClass Group for the past week and we have one more week to go. In the meantime, here are the links to help you learn how to make your own basic baby blanket:
The 20 minute video focuses on making a sampler square to practice the peg-doubling technique, while the pattern instructions detail how to apply the technique to make the actual baby blanket.