Fireman to the rescue 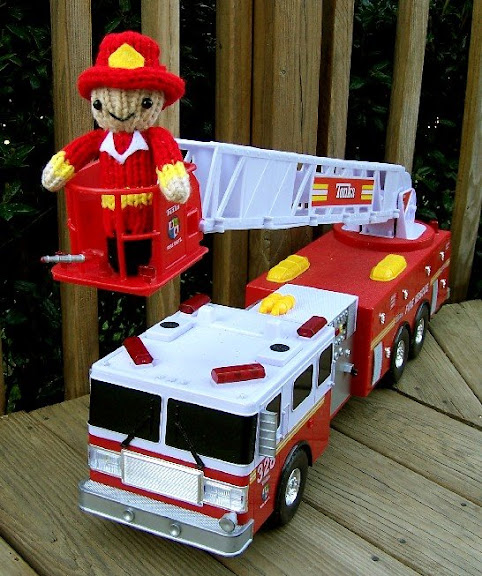 My grandson is happy - I finally finished his fireman. He is so obsessed with firemen & firetrucks that the entrance to the library off from the living room has become a fire station. A table and a floor lamp with a brass pole near the library doorway is now the station house. Every night he places three little firemen face down (one on a tissue box, one on the DVD remote and the other on the TV satellite remote) so they can slide down the lamp pole and head for the firetrucks in case of an emergency. When he's not battling a blaze at his sister's dollhouse, he's watching his "Lights & Ladders" DVD. Sometimes I think if I hear that DVD one more time I'll scream. 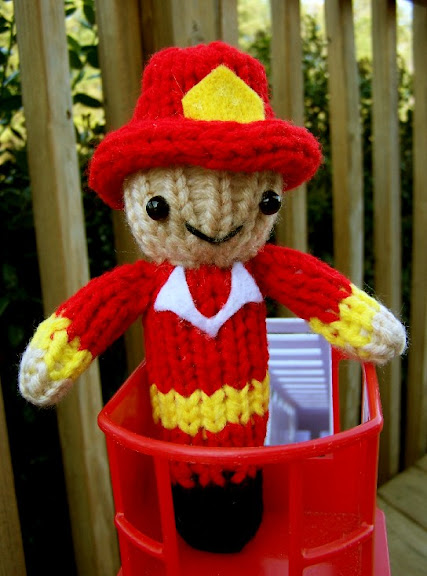 As you might have guessed, when I started making the little loomy amigurumis, I immediately got a request for a fireman so I immediately started designing one for my very special customer. My loomy arigurumi fireman was made very similar to the leprechaun, but with a few modifications. The following looms were used for this project:
Two strands of Red Heart Super Saver yarn were use for everything except Vanna's Choice in beige for the head. The fireman accidentally ended up a bit taller (6.5 inches) than the 4.5 inch leprechaun due to several yarn color changes. Also, I decided to put arms on this one. However, after he was finished my grandson immediately asked, "Where are his legs?" I tried to explain to him that he was made that way so he could stand in the firetruck bucket at the end of the ladder (see photo above). He replied that the fireman would have problems fighting fires, so I guess the next one will have to have legs. There's always a critic in every crowd. 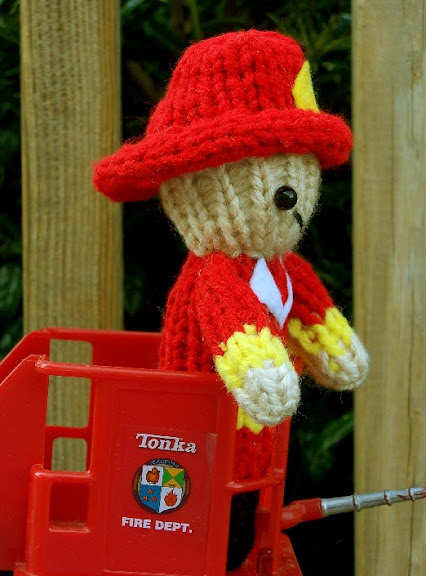 The hat posed the greatest challenge on this little fellow, since the back of the brim is elongated from the rest of the hat. To meet this challenge, I cast a 4-stitch I-cord circle onto 18 pegs of the 10" Knifty Knitter long loom and used the Knifty Knitter loom clips to decrease along with a couple of short rows toward the back of the hat. After that, I finished the hat as usual on 14 pegs and ended with a gathered bind off at the top. You can see that the shaping on the back brim worked rather well in the above side view photo.

Other finishing details included button eyes, an embroidered mouth and felt trim on the hat and shirt collar. This is so habit forming that I can't wait to start on my next little project.
Posted by Brenda, Domedweller at Thursday, April 09, 2009