Irish Washerwoman and other squares 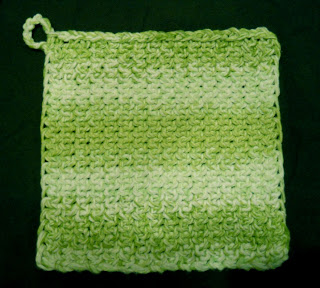 Since St. Patrick's Day is around the corner and in honor of my Celtic heritage, I decided to knit a square using Sugar 'n Cream Lime Stripes. The results is the Irish Washerwoman square, named after the traditional Irish jig. This is a fast-paced little melody that you will most likely recognize when you hear it played in the video below:

The Irish Washerwoman eight inch square was knit using two strands of yarn on eighteen pegs of the Knifty Knitter 24-peg blue loom and incorporating what I call the 2-peg stitch double flat knit stitch, which is a variation of the mock crochet stitch. Oddly enough, this square can be knit to the beat of its namesake, but I strongly advise a version with a little slower pace. The 2-peg stitch double flat knit stitch has become a favorite of mine over the past couple of years since it produces a nice stitch pattern with edges that don't roll. Since I use this stitch frequently, I also developed a special cast on and bind off that matches the stitch pattern. In addition to the Irish Washerwoman square, I used the same stitch pattern with one strand of Loops & Threads Charisma chunky yarn in Sunny Day. The square below is a 10 inch square made using all 24 pegs of the Knifty Knitter blue loom. This square will be part of my Caribbean Dreams afghan: 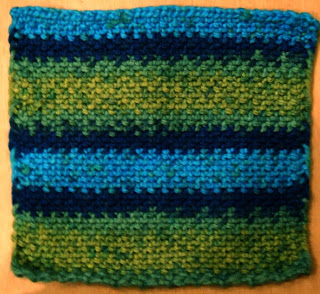 I had been on a "squares" kick for the past couple of weeks, prior to knitting the Irish Washerwoman cloth and the Caribbean Dreams square. This was triggered by Kelly Jones latest LoomClass offering, Andalusian Washcloth.  Although this pattern was recommended for a fine gauge loom, I had decided to try it out on a larger gauge loom, mainly because fine gauge knitting tends to cause numbness in my hands. The Andalusian results are pictured below: 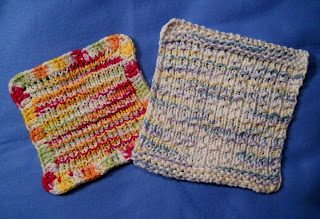 The smaller sherbet colored cloth on the left was made on the CindWood 1/2" gauge loom with one strand of Sugar'n Cream Over-the-Rainbow yarn. Using one strand on the regular gauge loom probably accounts for it's distorted hour-glass shape. The larger cloth was made using all the pegs on the Knifty Knitter 24-peg blue loom and two strands of Sugar "n Cream. I added a one inch garter stitch border to the beginning and end of the cloth. I actually meant to do a garter stitch border along the sides, but I didn't think of it until I had knit about 10 rows, so it only has a slip stitch border on the sides.

I've thought of another little project I would like to do for St. Patrick's Day, but as the old Irish saying goes:


“You'll never plow a field by turning it over in your mind!”
Posted by Brenda, Domedweller at Saturday, March 12, 2011