The U-wrap knit stitch is a technique used when doing the flat knit stitch to keep the stitch from becoming too tight. When I first posted information about the U-turn, or U-wrap, knit stitch, I planned on updating my blog with more detailed information on this stitch. I haven’t done this before now, because when the stitch was discussed on a Yahoo loom knitting list a statement was made that the U-wrap stitch was the “version of how to do the flat knit stitch to keep it loose that Lynn Carpenter (a long-time loomer & list member) had explained in groups many, many times.” Although the stitch was new to me as a relatively new loom knitter, I didn’t want to post information that was common knowledge among the loom knitting community as if was my own discovery. However, others must have missed past discussions of this technique, too, because I’ve had numerous requests for more detailed steps and pictures. In response to the requests, I’ve decided to go ahead post that information here. Although similar information is most likely buried somewhere in a Yahoo loom knitting group messages’ archive, the only reference I could find to the “u-wrap knit stitch” in Google, was on The Purling Sprite’s blog where Isela incorporates a version of this technique in her Crochet Mock Stitch Movie. (Update: Sometime during 2009, the original link to the Crochet Mock Stitch Movie became invalid. However, Isela has since created a video titled: The U-stitch, A Version of Creating a the Flat Stitch.)

Here’s my version the U-Wrap stitch: 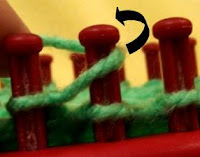 This is one of several ways to produce a regular knit stitch, or stockinette stitch. As you experiment you will notice that the way you hold the yarn controls the tension of the stitch. If the yarn is held flat across the pegs, the stitch will be very tight. If held in an "L" shape (i.e., the yarn is turned on the peg away from you at a right angle) the stitch will still be tight, but a bit looser than the regular flat knit stitch. In the illustrations above, the yarn is held in the "U" position while completing the knit stitch. This will yield an even looser version of the knit stitch and is good for small fast-paced projects when the tightness of the flat knit stitch is not desired. However, the most consistant way to produce a knit stitch is illustrated by Isela in her knit stitch video, which is the opposite of the method used to produce a purl stitch.


Update (added 11-03-08): Isela has recently made a video illustrating the the U-stitch. You can access it by clicking here.
Posted by Brenda, Domedweller at Saturday, January 06, 2007